The facelifted MG5 brings a little more glamour and technology to an already great package.


The 5 can still claim to be the first fully electric estate car on sale, narrowly beating the far pricier Taycan Sport Turismo. Right now, these are still your choices if you want a practical family wagon without the domineering height of an SUV.

But these are at very different ends of the spectrum - not least because the Porsche will turn every head while the current MG5 is blander than Baked Beans.

The new model certainly has a little more visual appeal, which an updated look which is far more modern. Compared to the more style-led crossover market there’s little in the way of sex appeal but it is uncontroversial and handsome.

What customers of the existing car will find attractive are the changes to the new model which answer many of their criticisms. First, there's the tech. Like its big brother, the ZS EV, the new 5 gets an updated infotainment system which includes the ability to connect to an app and set charging times and a pre-heater. You can also check your charge status on your phone, or you can now also look at an LED indicator next to the charge port.

On the inside two large screens dominate the dashboard inside and the material selection is anything but cheap. Yes, the MG looks more old-fashioned than the ID models from Volkswagen, for example. But in many areas the actual quality feels like a step up from the Volkswagens, and certainly the switches and infotainment systems are easier to use.

Unlike the current car, the new MG5 will be offered in two configurations: The basic model runs with a 174bhp motor and a 51kWh battery, which is enough for 199 miles of range, while the range-topping model actually has less power but a bigger battery, pairing a 154bhp motor with a 61kWh cell for 249 miles of range. The latter version is the combination we are used to with the outgoing 5.

But because both variants have the same torque figure, their 0-62mph sprint time of 8.3 seconds and 115 mph top speed are identical. It's actually a second slower to 62mph that the current car, but it never feels slow and doesn't feel like a downgrade in reality. In fact the 'tamer' power delivery is actually more relaxing. Charging is at a relaxed pace too.

While the basic version only charges with up to 70 kW, the top-spec MG5 can take up to 87 kW. That's on a par with models from Kia

Handling is likely to be lower down the priority list of new MG buyers than old, but the 5 is sharp enough for the task at hand. While it’s not as likely to put a smile on your face as the two-seater sports cars the company’s octagonal badge used to adorn, you at least get a comfy and relaxing ride with a very forgiving suspension setup. We have always appreciated the MG 5's comfort, and it is actually one of the very best cars on sale for soaking up broken road surfaces and potholes. The new model is more of the same - this isn't a car which has had its handling tuned on a racetrack, and we think it is the better as a result. Our only niggle is that steering is a touch too firm, as though the engineers think this might make the 5 feel more sporty. We'd much rather it was lighter to match the overall relaxed feel.

What the MG lacks in prestige and outright fun, it compensates with its practical virtues, and it’s very spacious for a car of its size. The boot has a deep step behind the loading sill but holds 479 litres of luggage, which can be expanded to 1367 litres in two simple steps by folding the asymmetrically divided rear seat. This still leaves a 'hump' though as the seats don't fold flat - something which will only bee a niggle if you are trying to load large items such as a Ikea purchase.

And there’s a hidden little detail that makes it stand out from other estate cars: a 220-volt socket. Those using the 5 as a zero-emissions work machine can power their tools outdoors without lots of unsightly extension leads. It will make you king of the campsite too, running everything from a hairdryer to a fridge in the middle of a field.

The MG5 might not have the class to itself for long. While rival manufacturers launched their electric future with top-selling SUVs, they’re slowly re-embracing the humble estate car as their electric offerings expand - not least because they have seen the success of the MG.

As well as the promise arrival of an electrified Vauxhall Astra Sport Tourer, Volkswagen is planning an estate version of its electric alternative to the Passat – as the flagship of the European ID family – while Audi has previewed an A6 Avant e-tron which will go into production in less than two years. For now, though, the MG5 remains an appealingly practical and relaxing car which deserves its popularity. 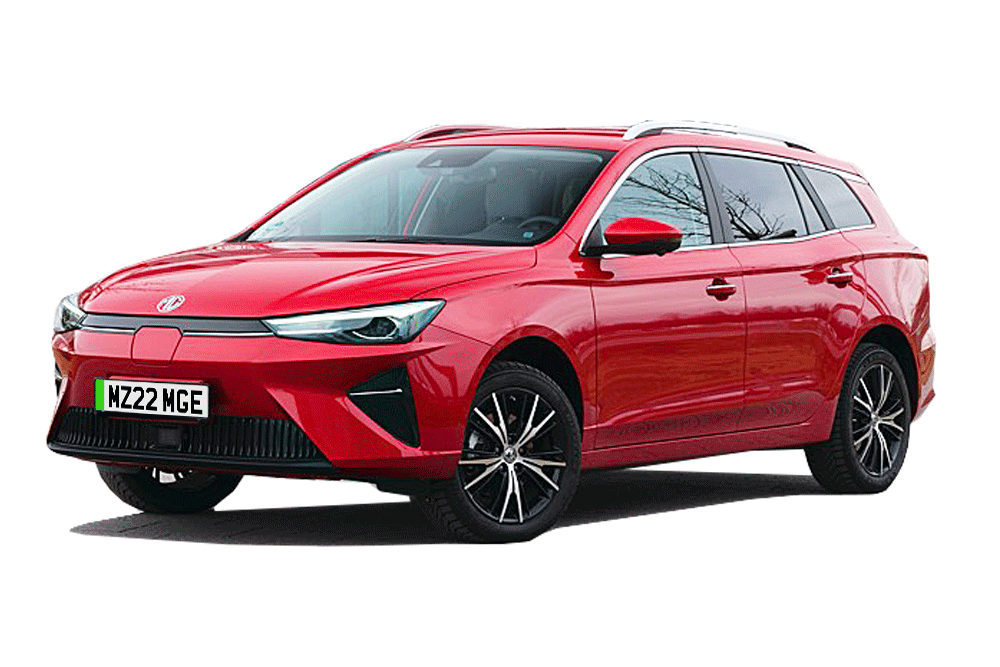 Read the definitive MG 5 EV 2023 review from the experts at Electrifying.com. Check specs, prices, range and compare the MG 5 EV 2023 with other hybrid and electric cars.

· Registered
Joined Jun 21, 2021
·
71 Posts
Thanks for posting the review mattykan. This is the one vehicle that is ticking a lot of boxes for me at the moment. I went to look at the pre-facelift the other day armed with a tape measure because those boot volumes don't tell the whole story. It amazes me that so many reviews of an estate car skip past any detail of load space and the like; it is why most people buy an estate in the first place. I am pleased that this isn't just a facelift though, a number of tweaks and the addition of the socket is very useful. I was hoping they would add a 12v socket but to have actually added a 220v one is excellent. It still isn't the complete article as an estate - flat folding seats and no boot lip are the pretty standard things you'd expect. Still, a diagonal load length of just about 2m means things like tent poles and the like will fit. Were I to go for one of these, I suspect I'd be unbolting the rear seats completely. There is a reviewer on Youtube who runs an EV mobile servicing business and he has just converted a LR one of these to a van type thing and still gets over 200 miles range even when fully loaded with his tools and doing lots of 70mph motorway miles.

While I look forward to alternative estate in the EV landscape soon, I can't help thinking that the Vauxhall, Audi and VW will all end up a LOT more expensive than this and will be pitched at the premium end of the market (again, like everything else in this sector). If other manufacturers don't start making cheaper and more mainstream EV's soon, MG is gonna come and steal the whole market share.
1 - 2 of 2 Posts

This is an older thread, you may not receive a response, and could be reviving an old thread. Please consider creating a new thread.