Information gleaned from an MG dealer about the EV model

Joined Jun 27, 2011
·
1,080 Posts
I visited the Apple MG dealer after picking up my own ZS from repair and had a good look at the red ZS EV demonstrator whilst there.

The demonstrator was the car that I saw at Apple MG's service centre on Saturday being PDI'd.

I was able to glean the following information from the very helpful sales person working there.

1. The delay in releasing the EV cars was due to MG needing to release a new software update before shipping the cars over from Thailand.
2. MG have so far registered 147 EVs on the road and at least 50 of them have been customer cars.
3. MG expect to have 700 cars registered by the end of this year with the rest of the orders being registered in January 2020.

All of the above was taken from the dealers update that get sent to them (I hope that I haven't got anyone in trouble by disclosing this information).

4. It is not possible to retrofit Android Auto on to the petrol versions of the ZS as I was interested in doing this. The sales person said that this is because MG have upgraded the systems inside the ZS.
5. It is not possible to retrofit any of the new safety equipment like blind spot protection or the Rear Cross Traffic Alert (RCTA), the latter I would really like to have because of the thick C pillars on the car.
6. Apple MG themselves have had many deposits placed for the ZS EV but none have been converted to confirmed sales as they would like prospective owners to test drive the EV car before going ahead with the purchase.
7. Apple MG were not able to choose the colour of the demonstrator as I was surprised that it was not in Pimlico Blue as that is the exclusive EV colour. We agreed that unless you knew about the windmill alloys, it would be hard to tell if it was the EV or the petrol version (minus the fuel flap of course)
8. All MG dealers were supplied with a 22KWH charge box plus Apple MG also have a smaller one located n their service centre. All EV cars are charged full as part of the PDI process in order for the battery testing and conditioning to take place so whereas Apple MG would normally supply £20 worth of petrol, they only need to pay £5 to fully charge any EV.

I have agreed with the sales person that when I take my own ZS to have serviced in May of next year, they would happily allow me to test drive their demonstrator to see if it would be a good replacement for my car in the future.

The ZS EV certainly ticks a lot of boxes for me.

Joined Jun 27, 2011
·
1,080 Posts
Given that MG only have 100 dealers, looking at the total number of EV models registered (147 total with over 50 being customer cars) it looks like some of the dealers hadn't even got their demonstrators before some lucky customers got their cars.

This is probably why Apple MG only had their demonstrator (unregistered when I saw it in the service garage as it was wearing dealer plates) on last Saturday.

I can confirm that when I saw it today, it was now wearing a 69 registered plate so will show up in October's registration stats.

adaveabbott said:
As far as i am aware 3 cars have so far been sold to the general public.
Click to expand...

Do you have any sources as it seems a bit low.

I am aware of at least 2 that have been sold, i.e. the one for James and Kate and the one that was mooted as the first MG EV car ever. 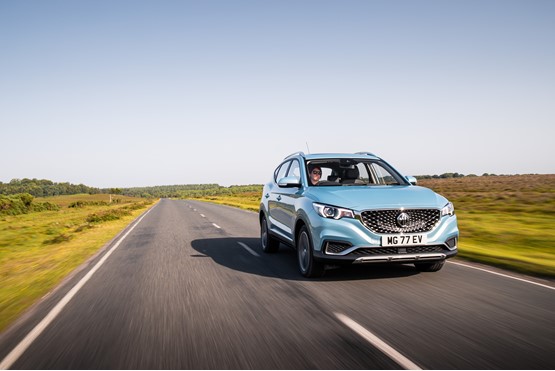 Bushey Heath Garage has handed over the MG electric vehicle (EV) to a UK customer.

Visiting YouTube, there are comments from other owners of the MG ZS EV saying that they've had the car already on the road.